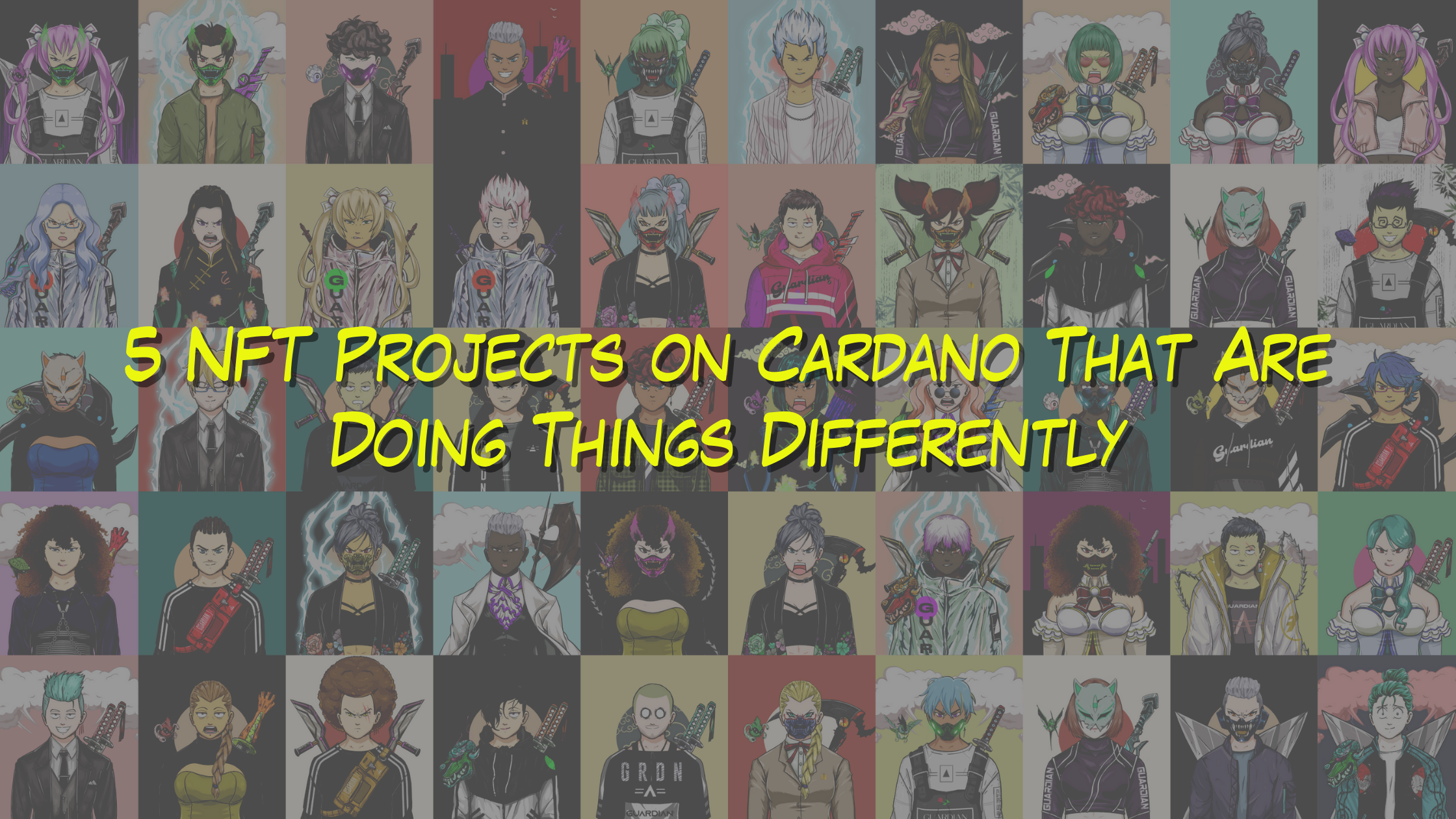 NFTs aren’t just jpegs, pfp collections, or art pieces. They can have much more value and utility than visual appeal.

More and more people are realizing this early on and are creating unique projects with groundbreaking utility that wouldn’t have been thought of a few years ago.

This is especially true on a blockchain like Cardano; one that greatly values community and real-world impact.

Here, we look at five innovative NFT projects building on Cardano and doing things differently than most.

These NFTs are released across three seasons that represent each clan in the ADA Ninjaz story.

Essentially, this project tells the story of a ninja war between three factions in the land of Ninava. These clans include:

This project’s NFTs are collections of randomly generated 2D avatars, from a total of over 450 unique attributes. They are drawn using the popular Japanese Seinen style of art and animation.

ADA Ninjaz has already started releasing music and parts of its manga, with the story’s various outcomes being chosen by the project’s community of NFT holders.

Cypherkicks provides real-life utility through its CNFTs by enabling its holders with the opportunity to hold actual cool kicks.

The project involves releasing a total of 5,000 planned NFTs of unique kicks spread across 12 seasons. Each season features sneaker models that are never repeated again in other seasons.

Aiming to bring sneaker-heads into the Cardano blockchain, Cypherkicks is forming partnerships with real sneaker stores around the world. These partnerships will enable Cypherkicks collectors to purchase their favorite, genuine kicks at discounted prices.

But that’s not all. Cypherkicks also aims to design, manufacture, and sell high-quality apparel, accessories, and customized sneakers under its brand.

3. Reva’s World: From CNFTs to Film

Reva’s World is a collection of 2100 CNFTs that allows its collectors to hold and be part of a film.

The film tells the story of Reva, a 26-year old woman who suffers from Electromagnetic Hypersensitivity (EHS). Because of her condition, Reva cannot live in a big city filled with electromagnetic fields. So she sets out to find the mystical village of Saral where she believes she can live comfortably.

The problem is that Saral doesn’t appear on any map and no one but Reva’s grandfather has ever heard of the village.

The CNFTs are divided into:

These NFTs hold various utilities such as:

Dognuts is a CNFT project deeply concerned with the wellbeing of man’s best friend. They’re dedicated to raising funds for animal shelters and charities that help the 70% of dogs in the world that can’t find homes.

A community-driven project, Dognuts NFTs have 8 breeds, 17 attribute categories, and over 400 traits.

Like most of the projects mentioned in our list, Dognuts have multiple drop seasons planned. In this case, if Dognuts NFT collectors hold a male and a female dog from the first season, then they’ll be airdropped Dognut puppies in the second season.

Dognuts won’t stop there in their quest to help animal shelters, however. They also plan to launch merchandise ideas for both dogs and humans, as well as a vinyl toy collection to further contribute to the care of as many stray dogs as possible.

Veritree specializes in verified, global restoration projects with a mission to provide the tools and technology we need in order to amplify the world’s best Nature-Based Solutions.

Veritree provides an extensive toolkit to its restoration partners that enables them to collect and manage ground-level data of their sustainability-based projects.

It’s considered a unique NFT project because of its Cardano Forest initiative that aims to plant and grow one million trees.

The process is simple; those who wish to contribute to the tree planting initiative can purchase tree tokens using their ADA. These tree tokens represent one tree that will be planted in the Cardano Forest.

There are different redemption tiers depending on the amount of ADA contributed and hence the number of trees planted. Starting from 15 ADA up to 100,000 ADA contributions, holders of veritree benefit from different rewards such as:

Invest in a Unique Project

The NFT projects listed here are only five of the many great projects building something special on Cardano. NFT utilities are truly as diverse as the human mind can imagine.

We invite you to become an important contributor to one of these. Join your ADA Ninjaz clan today to have your say on how an incredible story unfolds through different mediums.