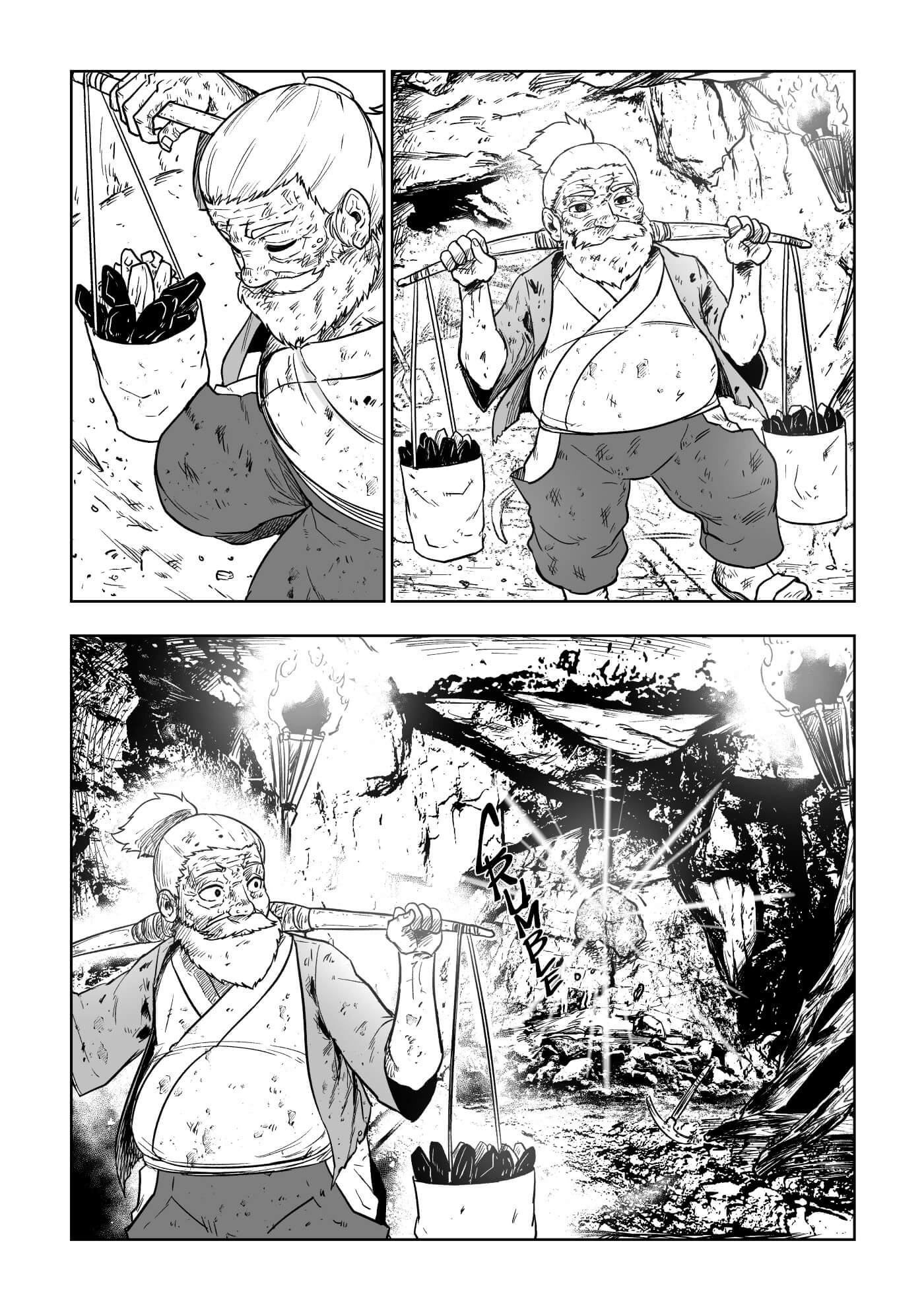 Iwaro, a plump and grumpy man, short in stature but loud in character, walked by his cart, his beast of burden, a weak looking donkey, pulling it with all his waning might. The cart was loaded — perhaps excessively so for the tired creature — with iron ore. The miner stopped his donkey and began to open the gate. He called out to Tsukuyomi, “Tsuku! May I come in?”

Iwaro walked his donkey and cart into the estate, not waiting for an answer. He closed the gate and began muttering loudly to himself, “Of course Iwaro, my dear friend, my colleague, come in! Here, let me help you,” Iwaro turned around as if answering the imaginary Tsukuyomi, “Oh thank you Tsuku! You’re ever so kind, and not at all forgetful about coming to help me bring the cart up from the village with one of your horses so that my donkey wouldn’t die of exhaustion. You’re a true friend and a great client,” as he finished, he softly growled under his breath, “idiot…”

Tsukuyomi, surprised at the sight of Iwaro walking down the path outside of his window, quickly searched around and took something from inside a box on a shelf and walked out of the workshop, “Was it…”

“Yes! It was. Today… you moron. Not tomorrow, not next week. Today!”, his flustered face puffed up rounder than it was already round.

“I swear to all my ancestors, if my beautiful Zuzu dies,” he patted his donkey, who obviously loved the attention and purred as his ears were massaged, “I’ll crash down on you and your whole estate like…like a…like…” he ran out of breath quicker than he could imagine a worthy metaphor.

Tsukuyomi took out what he had grabbed from his shelf. Iwaro’s face deflated and his breathing normalized as he took the sake bottle from Tsukuyomi’s hand.

“Don’t you go thinking this fixes everything… although I do admit you truly know your way to a man’s heart.”

“You will be if that happens again. For now, let’s unload this so you can get to work for those pig-scum, and so can I,” Iwaro backed the cart onto a corner of the workshop but paused as he heard no response from Tsuku. He coughed a couple of times and repeated, “pig-scum… right?”

“Right…” Tsukuyomi bowed his head and avoided Iwaro’s eyes as the short pudgy man snorted with disapproval, took a large swig of sake and handed the bottle back to Tsukuyomi, who took a gulp and corked it.

They both got back to work unloading the ore as Iwaro began his almost ritual rant about the imperial rule that crushed them and how freedom was around the corner, “and another thing. If they DARE think they’ll keep me… ME!… in that hole in the wall for much longer… oh… they’ll… they’ll see!…. Pig-scum.”

As he continued, Tsukuyomi took his usual part in the ritual rant as the passive and completely tuned-out audience.

The wooden spoon hit his forehead so loud the neighbors were sure to have heard… and if they hadn’t heard that, the morning routine would have surely been audible.

“Every bloody morning! I get up early, clean up your mess, take care of the kids and cook you a lavish breakfast…”

“Lavish might be a little of an overstatement?” Iwaro murmured angrily as he tried to catch himself from falling off the bed. His wife, Ida, a woman as plump and red in the face as he, still holding the spoon at the ready to strike against the usual sarcastic remark, swung without mercy. With sniper-like precision, the spoon struck its mark once more. Iwaro groaned, still confused if the headache was just the spoon, or the horrifying hangover from the previous night.

“…A LAVISH BREAKFAST! Better than YOU deserve… you dirty ox.”

The neighbor peaked over his fence and softly spoke out, “Hello…eh…dear neighbors..um..would you please be a little quieter, at least in the morni…”

Iwaro and Ida, in unison, shouted out at the top of their lungs, “Don’t you dare tell my darling to be quiet!” The shout brought Iwaro to a horrible coughing fit.

“Now look what you’ve done to my honey-bun!” Ida suddenly dropped her plump bottom on the bed and stroked his head, “are you ok, my love?”

“Well, then get your drunk ass off the bed and ready because you’ll be late! I’ll be a monkey’s ass if you think I’ll let them stick you in a cell for being late and have to take care of these kids all by myself.” She gives one last wack for tradition’s sake and walks out of the room.

“Sounds like a cell one way or the other…”

“What did you say?!” Ida peeks her head into the room, her red curly tufts of hair springing about on top of her head.

“That’s what I thought…”

Iwaro gave a sigh of relief as, bullet dodged, he got up to start his day.

Iwaro was sitting in the afternoon sun, basking in its warmth, as he snuck a sip or two of sake he had hidden next to his favourite “resting boulder”. The smoke that was spewing from the entrance to the cave was almost the same color as the dirt that was powdered all over his body and clothes. As he heard footsteps coming his way, he quickly hid the bottle and propped himself up as if he had been patiently looking at the smoke the whole time.

“You’d better reach your quota today, you lazy Ninavian. One more day under quote… please give me an excuse to report you and get rid of your blubbery presence,” the imperial guard and his two assistants walked by on their usual rounds of the mines.

“Of course your excellency,” Iwaro bowed as he spoke.

“That’s not my title and I think you know that… are you mocking me?”

“Of course not my lord,” Iwaro bowed deeper still.

As the guard walked away, Iwaro gave him an obscene gesture, quickly turning back to his almost meditative state of staring at the smoke as soon as he saw the guard begin to turn around. Fortunately for him, his defiance was not noticed and they walked away.

It didn’t take too long after for the smoke to subside, and so Iwaro grumpily made his way back in..

The embers from the logs he had set fire to against the mine’s wall were slowly dying down. He took his pickaxe and tested the surface of the charred wall. It crumbled easily after being so thoroughly dehydrated. He chipped away, filling his reed baskets with all the iron ore he could fit in them, and bent over to sling the wooden beam up on his back and shoulders, a full basket hanging from each end of the beam.

Throughout all this, Iwaro continuously mumbled on and on to himself about how Ninavia would rise up some day. Maybe not today, maybe not tomorrow… actually, he wasn’t quite sure what a conservative roadmap estimate could be for a Ninavaian uprising now that he was conversing out loud to himself… but he was sure it would come sooner rather than later! And they would get rid of the Emperor’s grasp over their lands once and for all.

As he went on with his brave and revolutionary monologue, he hadn’t taken more than two steps into the direction of the exit before a layer of the wall behind him crumbled to the ground. Fortunately for him, there were no ears in the vicinity to hear neither the revolutionary monologue nor his high pitched squeal.

As soon as he realized he was out of danger, he cleared his throat, stood up as tall as his short figure would extend and said to himself, in the manliest voice possible, “Silly wall, as if you’d scare me!” Another rock fell and made him flinch and cover his eyes.

As he slowly lowered his hand, he began to notice it. The flames of the torches flickered as if from a breeze. The dust settled and revealed what hid behind the fallen wall. It bathed the whole mineshaft in a soft blue light…