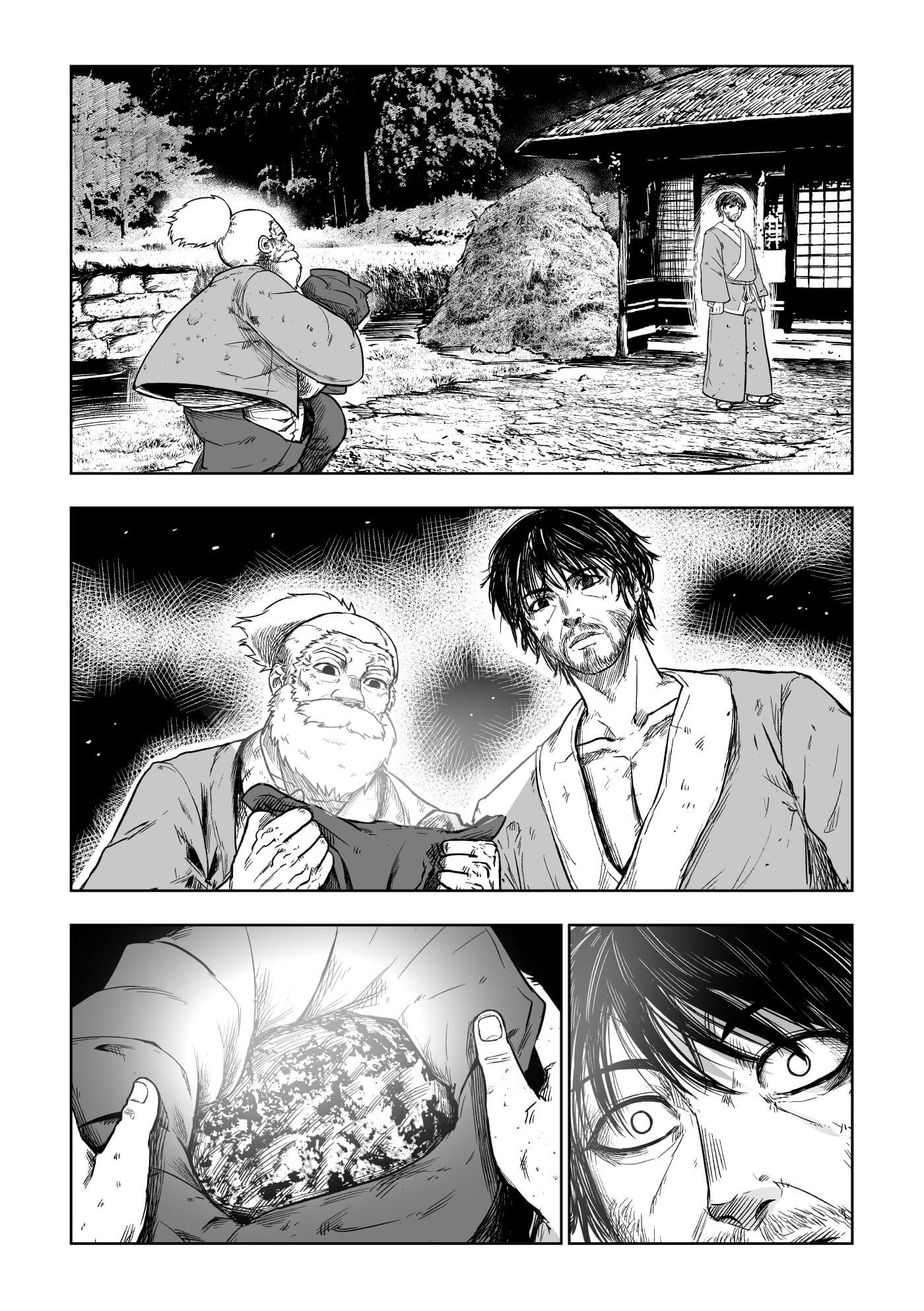 “Tsuku, you’d say we have a close relationship, right?”

“One based on trust and perhaps even loyalty that was grown and cherished since we were younger, right?”

“Will you just tell me what you have to say, please? When have I ever been untrustworthy to you?”

“Again with that, Iwaro? We were eleven years old you…” Tsukuyomi breathed and tried to compose himself, “…will you just spill it? What is it?”

Iwaro opened his bag and took out a large ball of rags. Out of a small gap, a little pulsating blue light shone through. A strange feeling began to creep over Tsukuyomi. The miner set the ball of rags on the table and slowly uncovered it. The large chunk of blue-glowing ore sat there, still pulsating and bathing the workshop in a dim blue glow.

The rough rock, about the size of a melon, was rough and amorphous, discolored in parts like ore usually is. It’s only distinguishing feature was the blue glow, but that was enough for Tsukuyomi to feel a warmth flowing over him, not in any physical sense, more as if the concept of fear had no meaning. Doubt and pain were just words. A feeling that was beyond what he believed he could truly comprehend. He felt like he was looking at a mountain in all its splendor, but the minutest details and its true grandeur would forever escape him.

The next feeling that crashed over him was more physical as the words came back to him. Unease, discomfort… dreadful foreboding. There was something in that incomprehensibility that scared him. The potential of this ore, whatever it was and wherever it came from, seemed beyond his league, above his unschooled knowledge. He ran and closed the windows and hung rags where he could for the light not to trickle out and for prying eyes to be kept at bay.

“What is it?”, asked Tsukuyomi.

“Do I look like I know?,” Iwaro presented his dirty appearance as if Tsukuyomi had never seen him before, “I break walls in a hole for a living and drink sake to forget that living. How should I know?”

“What did you bring it here for?”

“Tsuku, my friend, you’re a blacksmith, you work with ore, and unless I’m actually as much of a drunk as my dear wife says I am, this looks like ore to me. Why the hell do you think I brought it here? Paperweight? Doorstopper?”

“Why do I always ask knowing exactly what you’d say? And please… that question does not actually need an answer.”

The two men stared at the ore. Like anyone ignorant of something’s true nature, fear crept over them, but it’s beauty and ethereal glow matched the amount of fear with awe and wonder.

“It’s shiny and like nothing we’ve ever seen before,” remarked Iwaro, “of course it looks expensive.”

“What I mean is, it looks expensive enough to get two poor saps beheaded, or worse, for just laying eyes on it. Do the imperial guard and the mine’s foreman know that it is here?”

“Do you take me for a thief?!” Iwaro spoke up, indignant.

“Well… technically yes…” Iwaro’s indignation faded, “but from those who stole the land from us, so it’s not really theft if you think about it.”

Tsukuyomi breathed in and exhaled slowly, “please, get this off of my estate,” and he began to walk back to his house

“Look, I know you’ve had a rough time these last few years. We all know down at the village. I just thought, knowing that you like to create those little things you do…”

“I don’t know what you’re talking about,” Tsukuyomi stopped walking and tried to hide his embarrassment behind a stony face.

“Anyway, I just thought that perhaps you could create something beautiful, for you and Mizuki and your future ch…”

Iwaro paused his words as Tsukuyomi turned around and stared deep into his eyes. He then continued.

“Just, something that really came from inside and helped you feel better. I think you need to express yourself a little more, that’s all, maybe it’ll help…And as soon as I saw this… thing… I just thought ‘if there’s anyone that can make great use of this, it’s my pal Tsuku, and the empire can suck a swan's tail’.”

“Honey, is that Iwaro? Will he stay for dinner?” Mizuki asked from the window of their home.

As Iwaro shook his head, Tsukuyomi answered, “it is dear, but he won’t be staying.”

“Ok, probably best since I don’t think we have enough bottles of sake to quench his thirst,” Mizuki’s smile was felt from afar. Iwaro’s face contorted into one of disappointment and aversion. Tsukuyomi smiled too.

“Now she’ll tell my wife, and Ida will kill me. Thank you,” said Iwaro.

“If this thing is valuable, it’s not your wife you should be worried about.”

“This…” Iwaro pointed at the glowing ore, growing more serious than Tsukuyomi usually saw him, “this is part of Ninava. This is as much us as are our names. It’s one of the few things that they don’t know exists, and as such, they don’t yet have power over it. If I can keep that little piece of knowledge in my head, then I won a little battle in my heart. They’re the ones who have stolen everything from us. I’m just taking a bit of who we are back. I’m not worried. They deserve it and I’m glad I’m the one bringing that small judgment and punishment to them, whether they find out or not.”

Tsukuyomi couldn’t help but agree with his old friend, but he kept that to himself so as not to suffer any more speeches for the time being. He approached the glowing ore, touched it, and raised his fingers. No glow came from the residue that was left on the tips. It seemed nothing more than dirt, coarse and sandy between his fingertips, but not much more. The blue glow seemed to be coming from below the surface.

“I’ve seen your art, maybe you’ll glimpse it’s true nature and turn it into what it should have always become. You see that, right?”

Tsukuyomi lost himself staring at the soft blue glow, “all I see in this at the moment are questions… questions, and problems.”